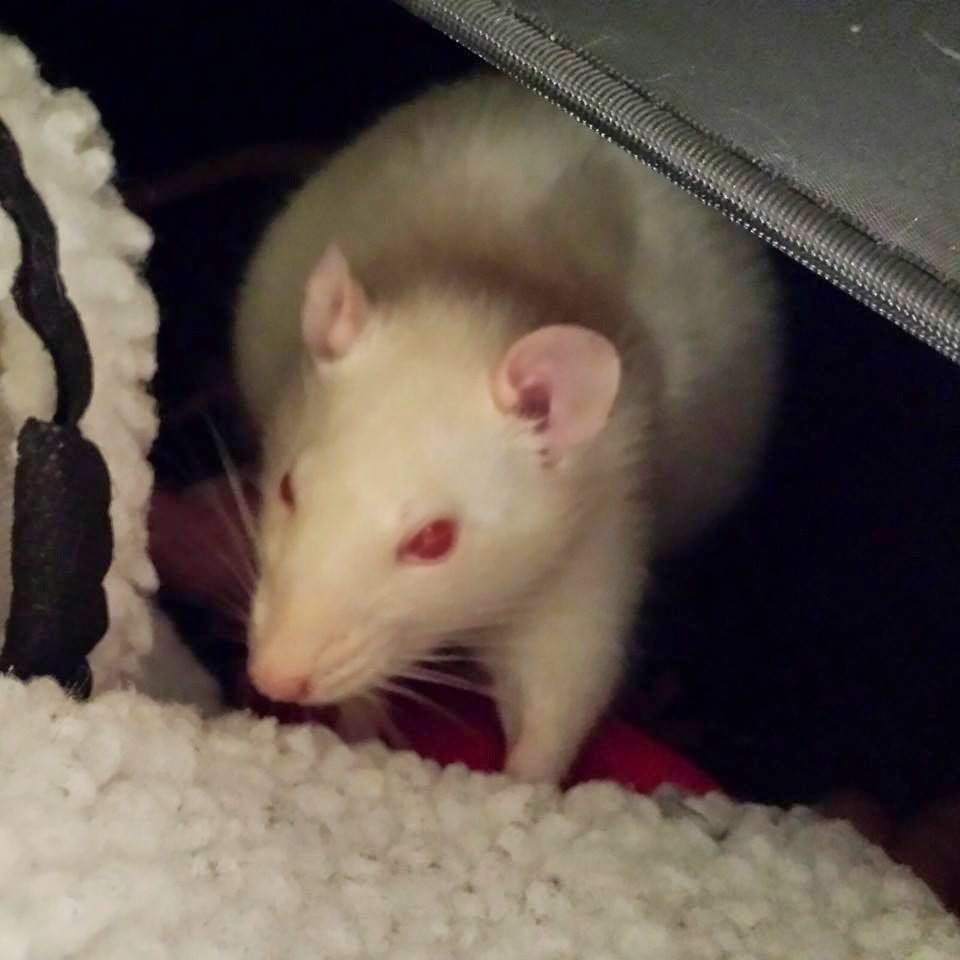 This is Eggshell.  She's one of three new mamas in our Ratscue.  She's not overly happy in this pic, but she's still the least crazy of the three.  New mamas can be very protective of their new brood.

She's also the only smooth PEW (that's Pink Eyed White) that gave birth.  The other two are Rex.  That means their coats are curly.  We'll try to get pics of them later when they're not so snarky.  :) 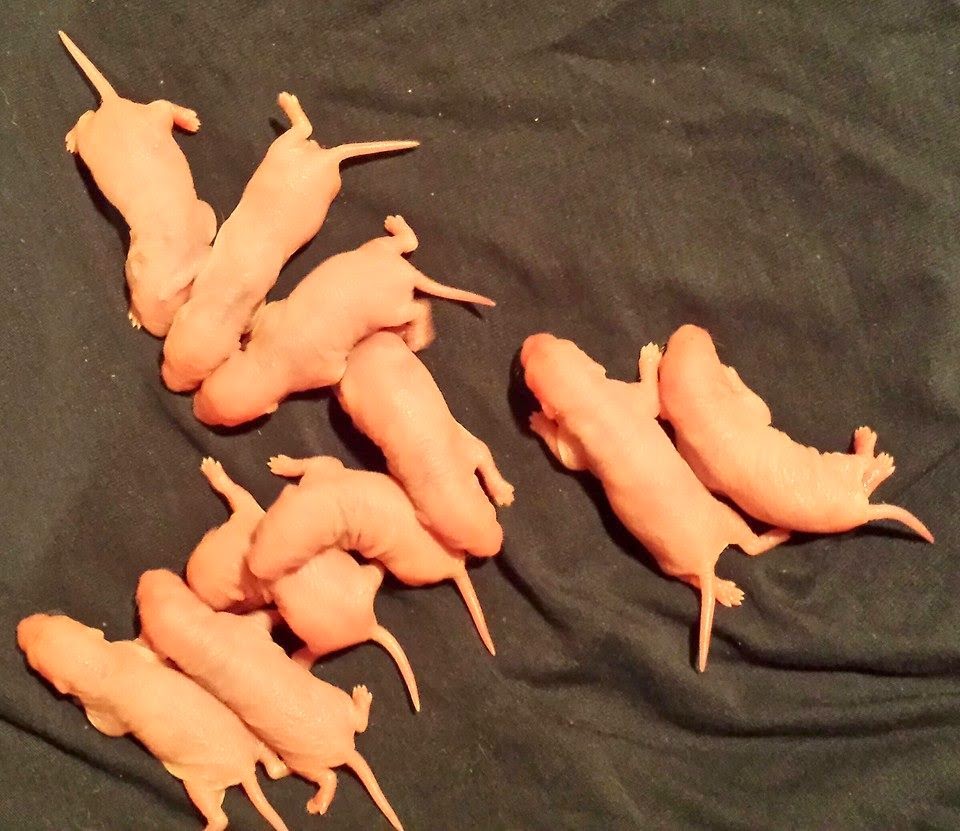 Eggshell recently gave birth to these crazy wee beasties.  Yes, there are 10.  We're considering ourselves very lucky since rats can have litters of 22 babies.  They're already comfortable with being touched, so socialization should be fairly easy with these little guys.  Because of their previous situation, we're trying not to disturb the mamas too much so they feel as safe and comfortable as possible.  Also, mamas are snarky.  I believe we've mentioned that. 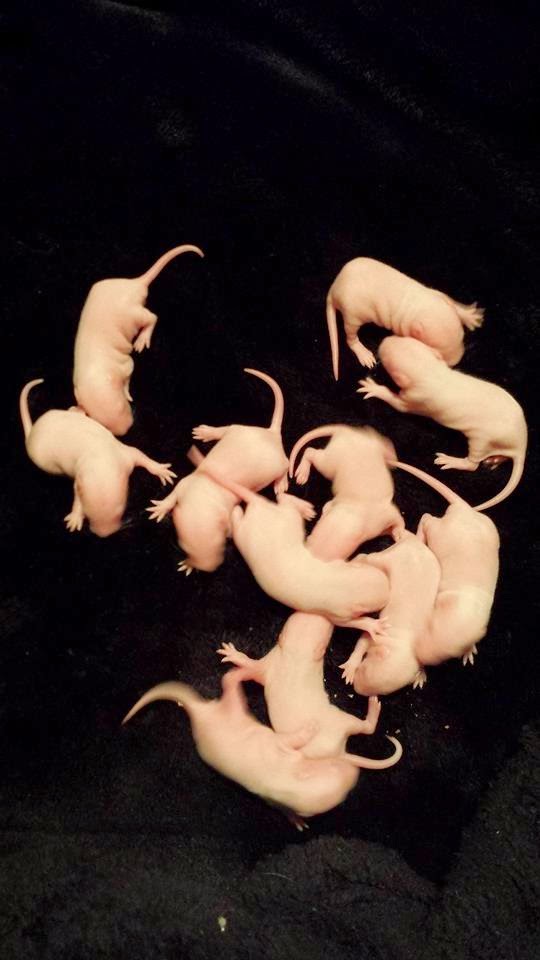 This is the first litter that was born.  Mama was not available for comment.. well, she was, but it was a lot of squeaking that we took to mean, "Leave me alone!  I've got 11 babies hanging on, and I'm tired and a bit snarky!  Go away!  Get the hell off my lawn!" 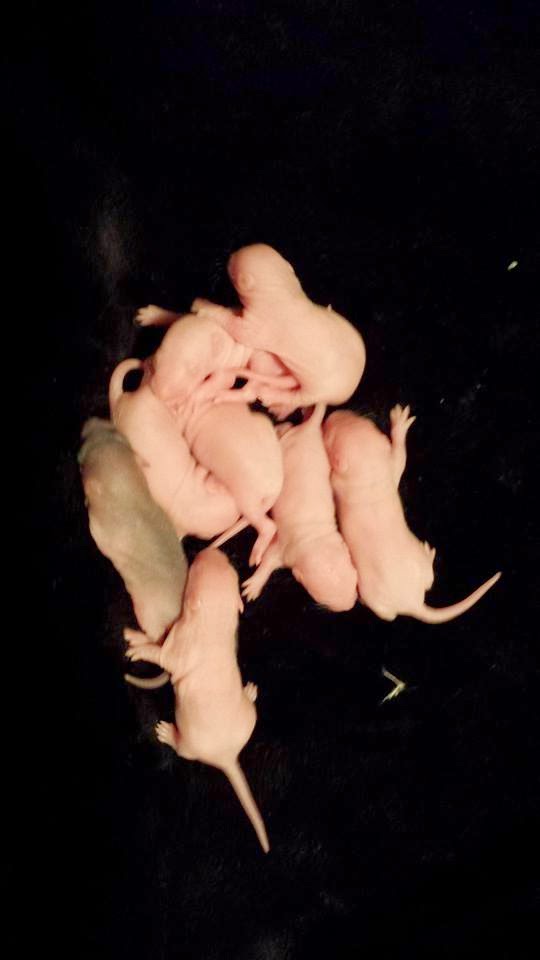 Our final litter shown here, has the ONE agouti ratty in the bunch. There was ONE agouti male in the lot.  We're fairly certain we know who papa is.  Mama is Maddie, a rex PEW, and Papa is Sam.  There are only 8 in this litter.  I'm sure Maddie is even more relieved than we are!

We will be posting updates on their growth and development.  We are especially interested in the outcome of their coats.  Did two rex ratties mate?  Will there be a double rex rat in their midst? How many of those cute curly rexes?  So many unknowns!  But we do know one thing! There is a lot of snoogles to be given in the next few weeks!
Posted by Trish Ess at 2:41 PM No comments:

This is just the beginning... 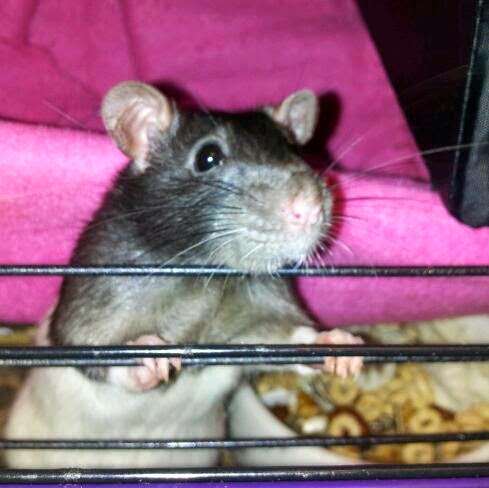 
Allow us to introduce ourselves.  We're Trish and John's Ratscue.  There's usually a bunch of us on any given day, but we're always warm, comfy, clean, our bellies are full, and there's always time for snoogles and scritches!

This blog will be what's new, who's new, what's happening, and whatever happens to come out of the keyboard.  :)


Things are pretty exciting here lately.  We welcomed a bunch of new ratties.  Boys and girls had to be separated as they came in the door - and you know what THAT means!  Yep.  NEW babies!  Three lots of them!  So we'll have a bunch ready for adoption in about 5 weeks!  SO EXCITING!  Also.. a little crazy.  Mama rats be cray.  Tip of the day:  NEVER leave boy rats and girl rats together.   Not even for a SECOND.  We're quick, and we know how to take advantage!


Our next post will be pics of the newest little pink balls of.. pink... and the following posts will be as we follow their development.  They are seriously cute.

So.. welcome to our blog.. feel free to post comments.   We love to hear about how adorable we are.  ;)